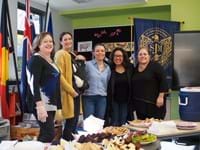 Career Highlight:  2011 Undefeated season and premiership with the Queensland Firebirds and making the Australian Squad in my debut year.  (Also a 2009 premiership with my university friends playing for Melbourne University in a premier league competition for fun, which ignited my passion for the sport again)

A Memory from St John’s: Playing in the yard at lunch time with friends, marbles and hanging off the monkey bars in the playground.

Advice to Students:  Be persistent for any goals you have, if you want it enough you will find a way, or you will be better off for trying to get there!

Career Highlight : I have two. The year after I finished high school I won a national singing/songwriting competition and performed in Nashville in the US as part of the prize. More recently, I released my debut album on Remote Control Records in 2019, was nominated for a Vic Music award, and was invited to showcase at the South By South-West Festival in Austin, Texas.

Memories from St John’s: My favourite day of the year was the St Johns Parish Fete, I used to love going around all the stalls with my best friends and eating until I felt sick. My favourite store was the bric a brac! I also loved the St Johns annual talent show, where I would perform every year with my friends!

Advice to students: Keep reading books and never be afraid to ask questions.

Memories from St John’s: I couldn’t wait for the school Fete in November. I was the buzzer boy in grade 6 (rang the bell for recess and lunch and end of school) which was a huge thrill.

Advice to students: Create a courage mantra for yourself that you can use whenever you’re feeling afraid or don’t belong. My two mantras that I’ve used throughout my life are “I’ve got this” and “I am enough”

A Memory from St John’s: First day at school and meeting all my new friends.

Advice to Students: Set your goals high, believe in yourself and work hard to achieve them.

Sophie finished school at St John’s in 2012 . She was the recipient of the annual year 6 Adamson Cotter Award, recognising outstanding community service in 2012. In 2017 Sophie was presented with a Leadership Achievement Award by Archbishop Dennis Hart.

Advice to Students: Demonstrate leadership and be a good role model to others.